Chair of Honor and flag at native american museum 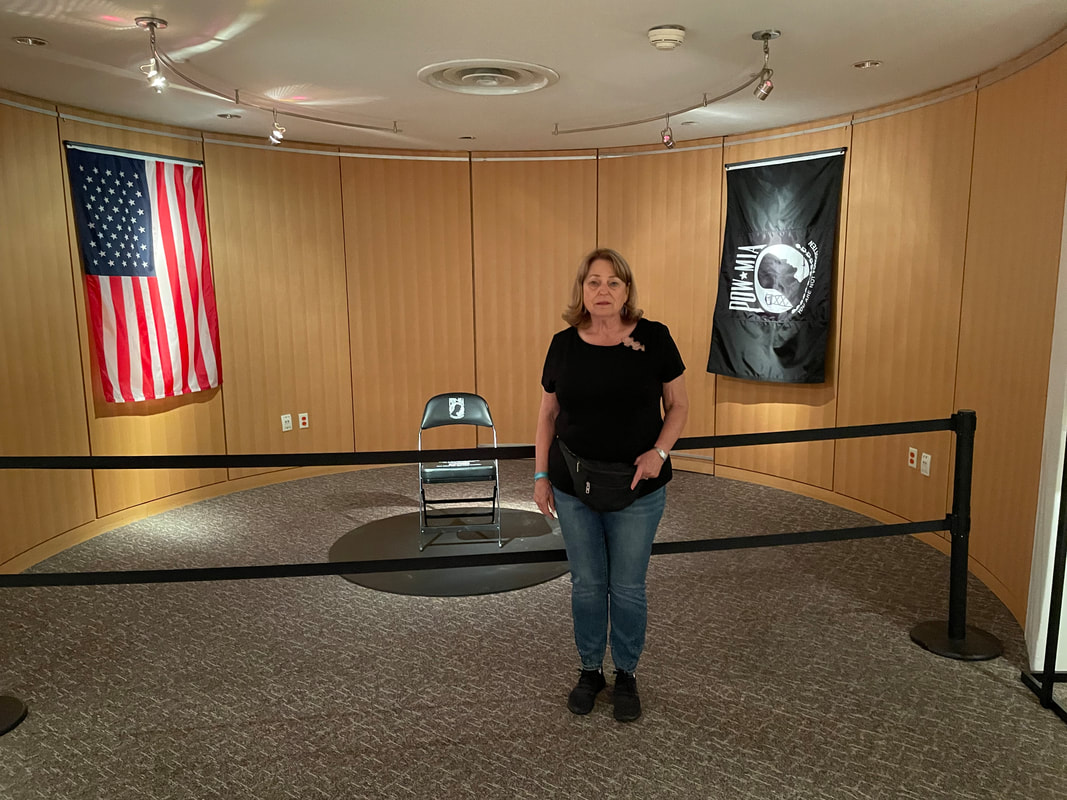 Donna Mills Caldwell (Cousin of CEO/Chairman of the Board Ann Mills-Griffiths) at the Smithsonian display in the Native American Museum on July 11th, 2022. 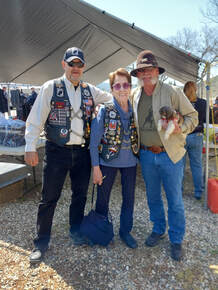 On June 12, National Women's Veterans Day, as part of the Gold Star Initiative of the Ironman Foundation, Blair Milo, 39 and a Navy Reserves veteran, competed in the Eagleman 70.3 Ironman in Cambridge, MD carrying an American and POW/MIA Flag in honor of Lt Col Anthony C. Shine, USAF (MIA 1972-1996) and all our nations' unaccounted for.  About 2,600 competitors participated in this half Triathlon comprising a 1.2 mile swim, a 56 mile bike and a 13.1 mile run.  Blair was an inspiration to participants and spectators alike as she competed -- crossing the finish line with a PR and flags in hand, smiling and saluting.   Blair is a former Navy Lt Cdr and Surface Warfare Officer stationed on the USS Mason, as well as the former Mayor of her hometown of La Porte, Indiana.  She has a huge heart for our nation's military, veterans, Gold Star and POW/MIA Families and since high school, has worn the POW/MIA bracelet of Navy Lt. Richard Clark (MIA Oct 24, 1967), who was accounted for in 2015.  She wore Clark's bracelet across the finish line as a reminder of the importance of an honorable accounting for all who serve.  On Flag Day, the League is grateful for the POW/MIA flag being included with the American flag and we salute the Ironman Foundation and athlete Blair Milo for this patriotic reminder to all of the importance of the fullest possible accounting. 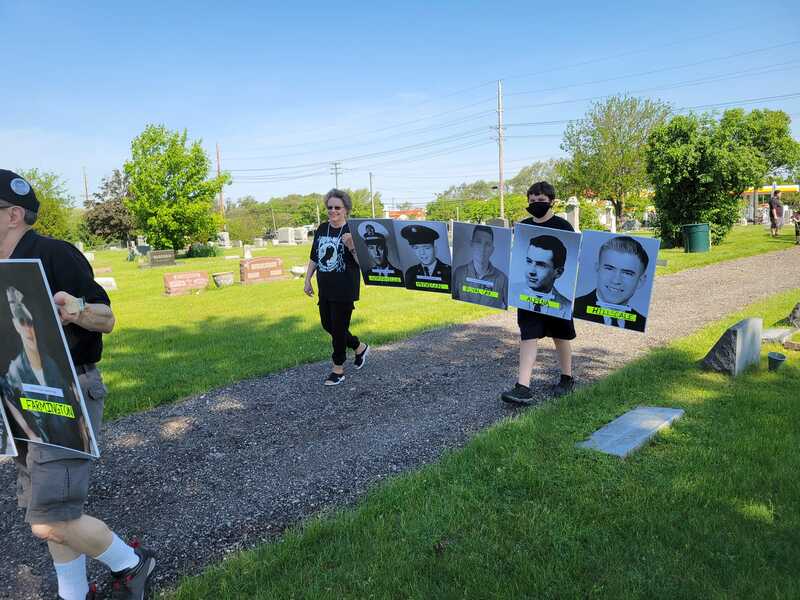 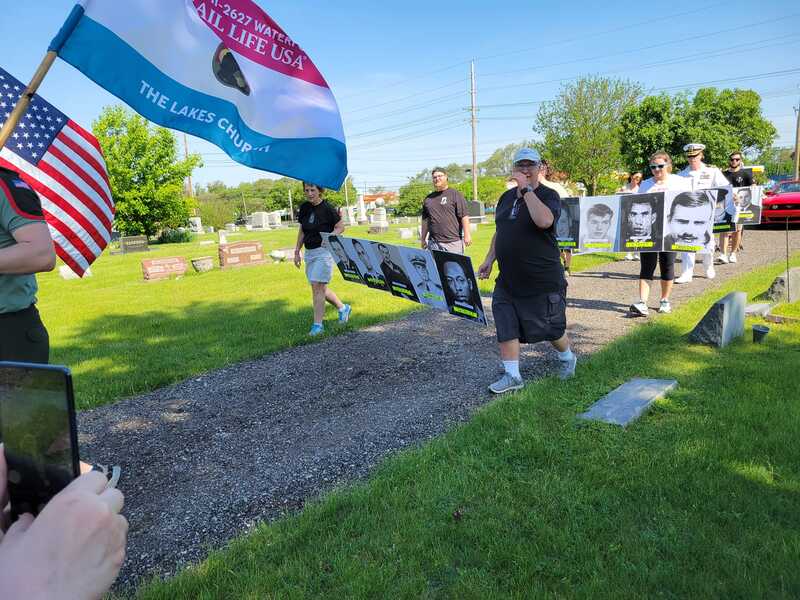 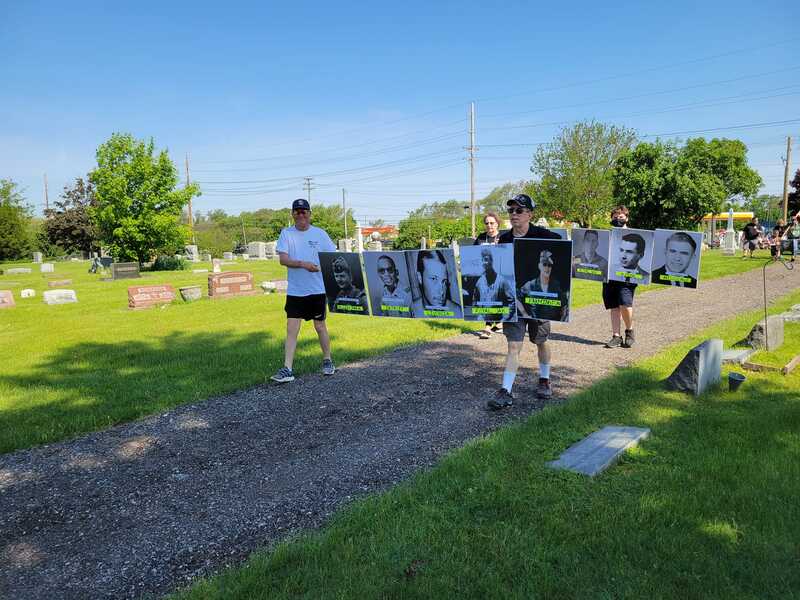 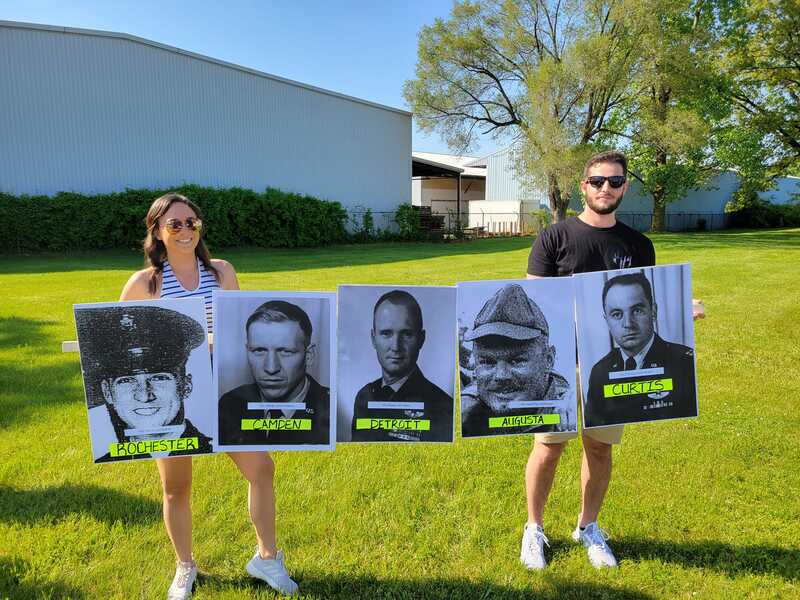 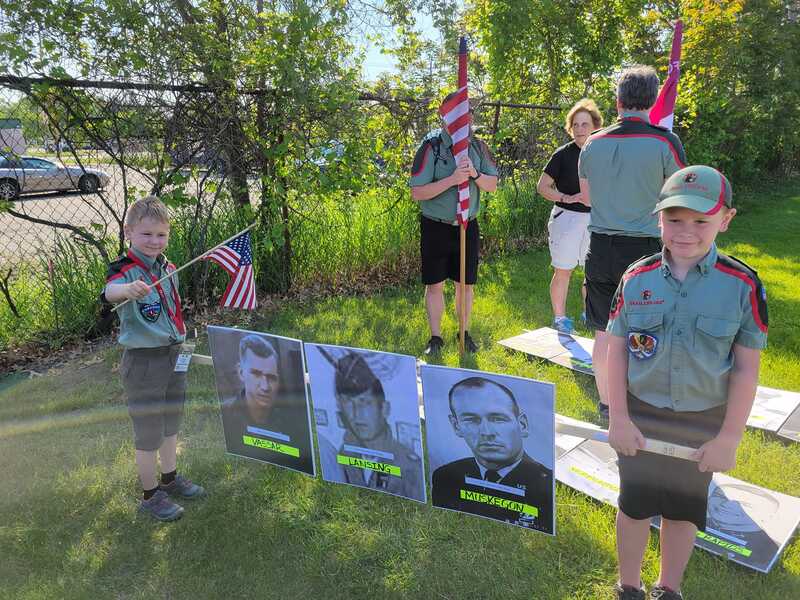 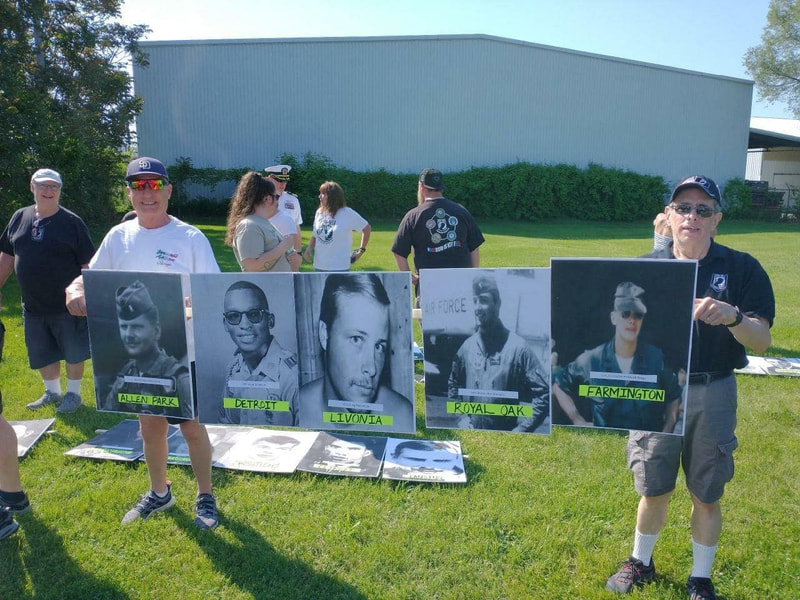 Run for the wall Chairman of the Board and CEO Ann Mills Griffiths with Vietnam's Ambassador to the U.S. Nguyen Quoc Dzung on April 1, 2022 at the Socialist Republic of Vietnam Embassy in Washington, D.C. Pictures from the presentation of a commemorative wreath at the Vietnam Veterans Memorial for National Vietnam War Veterans Day, where Kentucky State Coordinator Cindy Stonebreaker was in attendance.
National League of POW/MIA Families Board Member Pam Cain attended a POW/MIA Chair Dedication by Florida Chapters of Rolling Thunder on April 9th in Tallahassee, Florida.

Check out these photos from Southeast Regional Coordinator Dave Huffman and SE Virginia Coordinator Jeanie Huffman at the Vietnam Veterans Memorial from March 29, 2022.
Photos from the POW/MIA Flag Raising Ceremony in October of 2021 at the Norfolk International Airport: 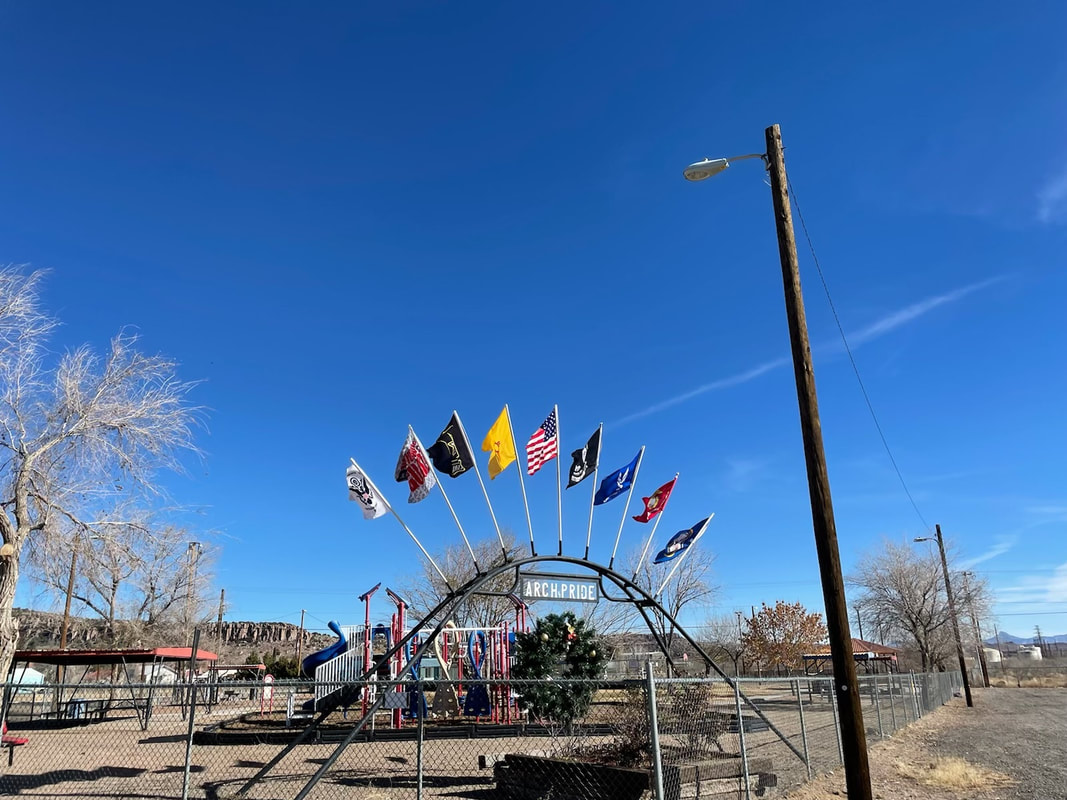 Photo of the Hurley Pride Arch in Hurley, NM sent to us by Brandon Hannes in March of 2022. Two photos of member Jeanie Huffman's car from 2021 in Arlington National Cemetery, with a POW/MIA decal on the side. The decal is honor of her father CDR Edward James Jacobs, Jr, listed as unaccounted for in 1967.
Take a look at the slideshow below from the Boise Valley POW/MIA Corporation! The pictures are from their 2021 "Wreaths Across America" event, and a visit to the memorial of LCDR Roderick L. Mayer at the University of Idaho. 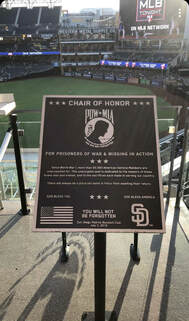 A touching tribute to America's military that sits at Petco Park.
The grandson of Ann Mills-Griffiths CEO/Chairman of the Board, Brandon Hannes sent in this photo that was taken July 9th, 2021 at Petco Park in San Diego, CA

POW*MIA Association Director Tim Cowden estimates the event drew 1,000 to perhaps 1,500 people combined over the two days this year. But that compares to a typical yearly attendance of around 2,500. In fact, during some years the rally has drawn as many as 5,000 people, he said.

And the association took all the necessary steps to ensure safety at the event, he said. They had a mitigation plan approved through the state and public health, Cowden said.

They used signs and worked to encourage social distancing of six feet They performed cleaning and sanitizing throughout the event.

And the association had free hand sanitizer containers available throughout the fairgrounds, as well as free masks and gloves for anyone who wanted them.

So that plan allowed the event to go forward despite the pandemic. But the association will need to work to provide all the funds it typically does in normal years, Cowden said.

The organization - which formed in American Falls in 2000 and came to Pocatello in 2005 - provides financial support and raises public awareness of the prisoner of war and missing in action issues.

The organization also supports the Idaho State Veterans Home in Pocatello and charities in local communities that need help, according to Jennifer Bowen, a past board member of POW*MIA.

“We are honored to participate with other events and businesses within our community and surrounding community actually because that's our way of being able to say thank you for supporting us and helping us arrive at a 20th anniversary,” Bowen said.

And although the income from the rodeo was down this year, Cowden said the organization will still do its fundraising outside of the motorcycle rally.

It both raises funds throughout the year and receives donations. J.R. Simplot is a major donor as well as other businesses and organizations, he said.

That income is vital. The POW*MIA organization and funding it provides is crucial to maintaining awareness of the issue of missing veterans, said Mark Stephensen, vice chairman of the National League of POW families, which receives funds from POW*MIA.

The national league was incorporated in 1970 to focus on the release of all prisoners, the fullest possible accounting for the missing, and repatriation of all recoverable remains of those who died in the Vietnam War, Stephensen said.

So 1,060 total remains have been returned so far. Currently there are eight Idahoans who remain unaccounted for in Vietnam, according to Stephensen.

“They're unaccounted for and we need to bring them back,” he said. “We need the fullest possible accounting. Can their remains be brought back? If they can't be recovered are there reasons why they can't?”

He said POW*MIA helps keep that issue in the minds of those in Congress, even though the Vietnam War ended a long time ago. That can be vital.

For instance, one time years ago a team working at a site in Vietnam was told to come back because their funding was cut off. And they were preparing to leave. But Stephensen called the Idaho congressional delegation about it.

“The team was told to unpack. You're staying where you're at,” Stephensen said. “Funding has been approved.”

He says it's that kind of quiet respectful behind the scenes involvement that's become a trust for Idaho congressmen.
“It's amazing,” Stephensen said.

The rally also featured unique and entertaining motorcycle events. These included at the motorcycle rodeo featuring motorcyclists riding around barrels to finish the course in the fastest time.

Then there were motorcyclists competing to create the loudest noise revving their unmuffled motorcycles as measured by a meter (the winner went over 92 decibels).

Also, motorcyclists used their front tires to push barrels to get the barrels across the finish line in the fastest time.

The site also featured a host of vendors selling food, patches stitched to order by seamstresses under the grandstand, and pins and other items related to the prisoners of war and missing in action issues.

“We really are very honored and grateful we could hold a patriotic event, especially this year with the challenges it's presented” said past POW*MIA Association board member Jennifer Bowen.

**Please see photos below from rally**

Crosby, Susan Missing Man Table :  "This is the Missing Man table I had at a film showing that I hosted of the film... "21 Years- A Folded Flag". Richard Fitts, Jr. brought his father's green beret to include on the table. Hot Springs, NC July 2019 2nd

THIS YEAR, THE 20TH ANNUAL POW*MIA AWARENESS RALLY AND MOTORCYCLE RODEO IS SCHEDULED FOR JULY 24-25, 2020." AND "THE 17TH ANNUAL THUNDER RUN WILL OCCUR ON MONDAY, MEMORIAL DAY, MAY 25, 2020. THE RUN BEGINS AT CENTURY HIGH SCHOOL AND GOES TO DOWNEY, IDAHO, THEN TO LAVA HOT SPRINGS, IDAHO, BACK TO POCATELLO TO THE IDAHO STATE VETERANS HOME, THEN CONCLUDES BACK AT CENTURY HIGH SCHOOL FOR THE IDAHO FIELD OF HEROES MEMORIAL. ALL ARE WELCOME. THIS YEAR PHYSICAL DISTANCING WILL LIMIT OUR ABILITY TO GATHER AND TO HOST CEREMONIES, BUT WILL STILL OCCUR
THE LEAGUE FLAG WAS PROMINENT AT  LOCAL VETERANS DAY CEREMONY.  THE CEREMONY WAS SPONSORED BY THE PORT OF ANACORTES AND THE LOCAL AMERICAN LEGION CHAPTER .
​THE THEME WAS “WOMEN IN THE MILITARY.”