In keeping with the President and First Lady’s commitment to honor the sacrifices of all who serve - veterans, their families, caregivers, and survivors - the League's POW/MIA flag was restored to its globally recognized position on top of the White House. This action reaffirms our Nation's commitment to account as fully as possible for American Prisoners-of-War and Missing-in-Action, as well as other US personnel still unaccounted-for from the Vietnam War and wars and conflicts further past, thus ending the uncertainty of their families.

National League of POW/MIA Families
6920 Braddock Road, Suite B213
Annandale, VA  22003
THE MEN ARE THE MISSION​
​As of February 6, the number of Americans Missing and Unaccounted-for from
​the Vietnam War is 1,581.

​Minister of Public Security General To Lam received a delegation of the US National League of Families of Prisoners of War and Missing in Action (POW/MIA), which was on a visit to Vietnam, on December 12, in Hanoi. 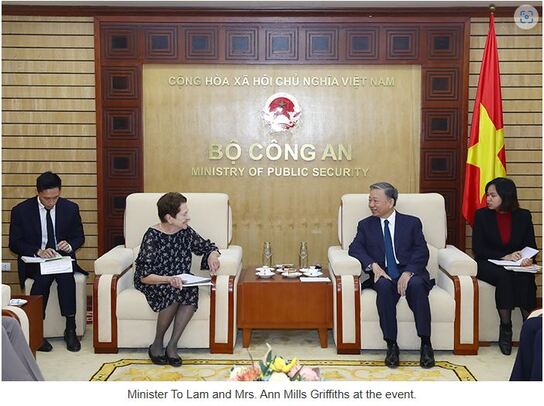 Thousands of Men Have Come Home Because of Him

​Johnie Webb has spent nearly half a century spearheading the search for those missing in action                  from America’s wars. Now, he’s finally getting his own homecoming..
​
For nearly half a century, Johnie Webb has been the heart and soul of the Pentagon’s effort to put the pieces back together for thousands of families whose loved ones were taken prisoner, killed in action, or buried in an unknown grave and never got their proper homecoming. He has navigated the fraught politics in the aftermath of an unpopular war, balancing the sometimes-competing interests of Congressional budgets with those of anguished family members who turned their grief into activism. Though approximately 80,000 U.S. service members are still unaccounted for, the team Webb built at what is now the Defense POW/MIA Accounting Agency has located and identified and returned to their families for a proper burial the remains of more than 3,000 soldiers, sailors, airmen and Marines from far-flung battlefields as far back as World War II and as recent as Iraq.  Read more here!

Today, January 27th, we remember the 50th Anniversary of the signing in 1973 of the "Paris Peace Accords" that ended active US involvement in the Vietnam War.  Families around the world, but mostly in America, breathlessly awaited word of as to whether their loved one would be coming home, and shortly thereafter, 591 POWs returned to national celebrations.  Thankful for all who returned, Vietnam War POW/MIA families continue seeking answers, an end to uncertainty that we've pursued since before the end of that long-ago war...........YOU CAN HELP..........Please let President Biden know you are grateful that our POW/MIA flag flies over the White House......signaling worldwide our Nation's commitment to accounting as fully as possible for America's 1,581 unreturned Vietnam War Veterans. ​ 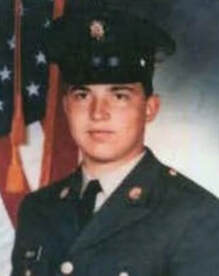 In October 1971, Green was assigned to the 68th Aviation Company, 52nd Aviation Battalion, 17th Aviation Group. On Oct. 26, Green was serving as the door gunner on a CH-47B Chinook helicopter when it went down over water in bad weather while flying from Tuy Hoa to Cam Ranh Bay in Vietnam. Remains of four of the 10 Soldiers on board were recovered during search and rescue operations following the crash, but Green was not accounted for.

An unsuccessful recovery attempt was made in 1974 when divers from the Joint Casualty Resolution Center dove on what was believed to be the crash site. A number of investigation and recovery efforts took place between 1994 and 2021 with a June 2021 recovery mission finding possible human remains and material evidence.

Green’s name is recorded on the National Vietnam Veterans Memorial in Washington, D.C., and the American Battle Monuments Commission’s Courts of the Missing at the National Memorial Cemetery of the Pacific in Honolulu, along with others who are unaccounted-for from the Vietnam War. A rosette will be placed next to his name to indicate he has been accounted for.

Green’s will be buried in Ramona, California on Feb. 23, 2023.
www.dpaa.mil/News-Stories/News-Releases/PressReleaseArticleView/Article/3139077/soldier-accounted-for-from-vietnam-war-green-t/ 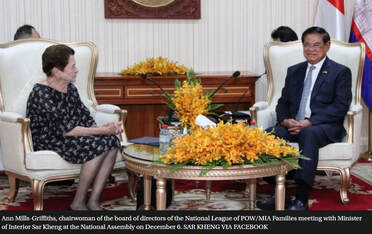 Ann Mills-Griffiths, chairwoman of the board of directors of the National League of POW/MIA Families, praised Cambodia for being one the league’s most supportive partners as it sought to repatriate the remains of American soldiers who went missing during the war.
Mills-Griffiths offered her thanks during a courtesy call with Minister of Interior Sar Kheng at the National Assembly on December 6.


“Despite the Covid-19 situation in Cambodia, the Kingdom has shown that there has been no slowdown in the search for the remains of missing American soldiers, and progress has been made. Cambodia has worked closely with its US partners,” she said.
During the meeting, she told Sar Kheng that she has visited Cambodia many times, but this would likely be her last journey to the Kingdom. She extended her thanks to King Norodom Sihamoni, Prime Minister Hun Sen, Sar Kheng and all of the officials who had worked tirelessly to provide humanitarian assistance in helping search for the remains of missing Americans.
​www.phnompenhpost.com/national/us-powmia-chair-praises-kingdom

Ann Mills-Griffiths, Chairman of the Board/CEO, National League of POW/MIA Families Visits The Queen Mother Library of the Documentation Center of Cambodia 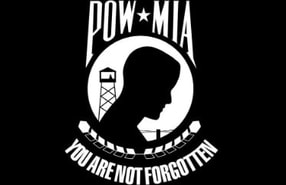 Though names of Vietnam War missing seldom appear in recent DPAA releases, the League is thankful that US personnel lost in WWII and the Korean War are being disinterred from US cemeteries worldwide and, in a few WWII cases, being recovered.  These Americans are being identified and returned to their families for burial with full military honors.  The League is grateful that our efforts since formation on May 28, 1970, are now bringing about long-overdue recognition, but remains hopeful that answers on our Vietnam War missing will soon increase and end the uncertainty of impacted families.  Ann Mills-Griffiths, Chairman/CEO

MIA Update: The Defense POW/MIA Accounting Agency announced four burial updates for service members who have been missing and unaccounted-for from World War II and Korea. Returning home for burial with full military honors are: 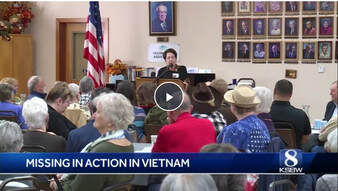 Leader of Vietnam POW organization speaks on the Central Coast ahead of Veterans Day
​
One of the most recognizable flags in the country hangs from the nation’s capital and public buildings in cities across the country – it's the flag of
Vietnam POWs and MIA.
Ann Mills-Griffiths, the CEO of the National League of POW/MIA Families was on the central coast, the guest speaker at the Active Seniors center in Salinas.
Please click on link below:
www.ksbw.com/article/leader-of-vietnam-pow-organization-speaks-on-the-central-coast-ahead-of-veterans-day/41929679 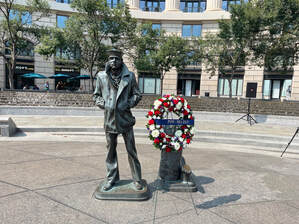 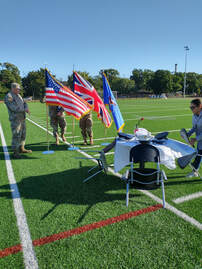 ​Sharing with us is easy, just message your photos to the League Facebook page or admin@pow-miafamiles.org with a brief description of when & where
the photo was taken.
​All proper credits will be given. 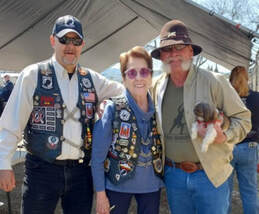 Accounting for all of the missing will never be possible, but working together, we can and will achieve the fullest possible accounting for America's Vietnam War POW/MIAs.
​This message reaches those serving today in Iraq, Syria, Afghanistan and at bases, posts and stations around the world. They NEED TO know if captured or missing while serving, our nation will be there for them.